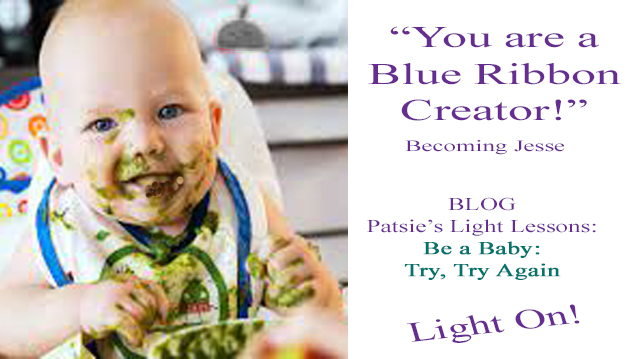 Babies learn to fail. And that guarantees that they will not fail to learn.

Every baby tries and tries… whatever… whether it is grasping at a toy, capturing applesauce on a spoon, rolling over, crawling, standing up, taking that first step.

Suddenly, Baby has the toy in his hand! The spoon in his fingers! The couch cushion teeters as Baby pulls himself up… stands up.
Baby squeals with delight. We cheer and applaud!

This is how Babies become.

Becoming Jesse knows and shares this:

There is not one note in a symphony.

Nor one step in a dance.

So, too, there is not one moment in a child.

It is in the flow. Therein lies the Magic.

Think about this. We did not worry that Baby failed over, and over again. And neither did Baby. He just kept trying… no matter how many times he failed. He was in the flow of trying-failing, trying-failing… until… success!

And the best part: Baby does not whine or weep about all those times he tried and failed.

Not a bit of that! Baby is playful. Baby is curious.

And Baby moves on to the next thing! Because there is always a next thing!

So, Baby has quite a lesson to teach us!

Be a baby! Fail until you succeed! All Baby’s attempts eventually end in triumph!

There is always something to TRY.

And, intrinsically, that means there is always going to be something to FAIL.

Yes, it is the old proverb come for a visit:

If at first you don’t succeed,

In his 2008 book “Outliers,” Malcolm Gladwell wrote that “ten thousand hours is the magic number of greatness.”  Babies have precocious talent: curious and experimenting; and opportunities to practice-practice-practice – or try-try-again – early and often put you in a place of inventing, innovating, creating. You can’t help it. It is who you are!

As Gladwell writes, this is the trying and failing that allowed Bill Gates to finally, successfully invent software and the Beatles to transform modern rock and roll.

Thrill in your Every Effort

It’s time to stop whining and/or weeping – telling and re-telling the sad story of how hard you tried… struggled, bent over backwards… and how badly you failed, flopped, bombed, came to nothing.

Be a Baby! Make one more attempt. Try again! And squeal with delight at your ultimate success!

Then you can move on to your next thing, your next step.

This is your journey – the journey of your becoming: from the beautiful star-light-you – to being ensconced in physical-flesh-and-bone. Remember, you are a powerful, light filled physical-being creator.

I like to remark that you chose to be an earthling, where you can create yourself in every moment – starting, like Baby –  inside the womb as one teeny tiny microscopic cell: a zygote – the one cell that creates like crazy! Increasing all your cells exponentially!

It’s How You Create

You are quite astonishing – you wondrous creator you! As “Becoming Jesse” says:

“You are a blue-ribbon creator.”

It’s Not All Easy

Ok. That’s true. But think of what else is built into your trying-failing: Patience! Perseverance! As Baby, you thought nothing of it. You welcomed every challenge, every riddle.

Crawling across the floor to get to Mama, standing up to reach Daddy’s hand, walking to pick up the ball, dancing to music!

And isn’t it interesting, that just the right muscles developed for you with each, and every attempt! Baby! You are so strong and so flexible!

Remember, too, that amazing brain you have. It remembers what you have tried – and it loves to have something new to try again.

You’re never too old to be a Baby. Babies – all humans – learn to fail. So, get really good at failing.

It will guarantee that you will not fail to learn. 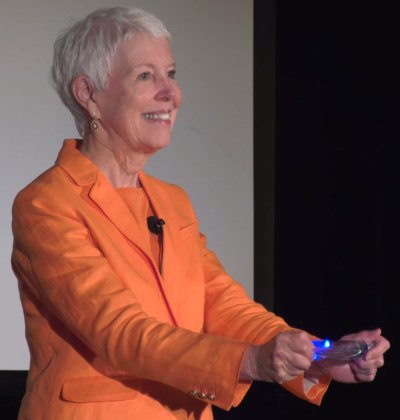 Get Your Own Light Stick! 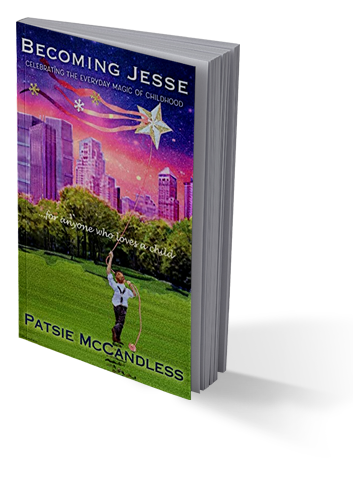 Patsie is thrilled to offer you a FREE introduction to Becoming Jesse plus one of Jesse’s Light Lessons!

Fill out the form below to receive your free gifts!